SPORTS A memorable triumph against the odds in MMA

Minowaman wins the superhulk tournament, outweighed by an average of 108 pounds per opponent, 2 of them outweighed him by over 150 pounds, wins his final fight versus Soko by an out of nowhere KO against the ropes.

Minowaman's an MMA journeyman who embodies the warrior spirit of a true fighter, who will take all comers regardless of reputation, shape or size. Nobody could have seriously predicted Minowaman to take down this tournament at the outset, yet he defied the odds and did just that. I'll remember seeing him win this tournament as one of my favourite memories of MMA. War Minowaman. 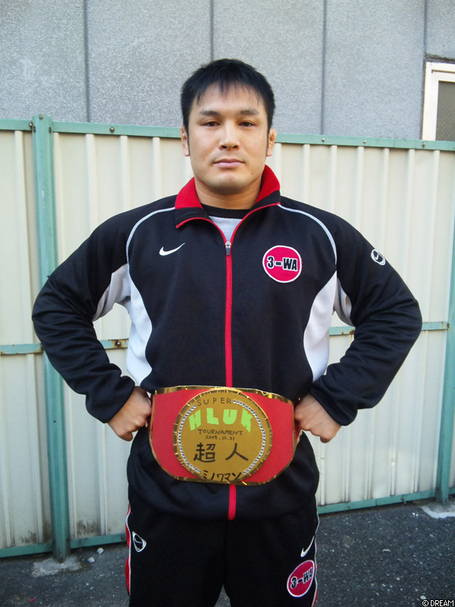 Welcome to the Machine

"Real Pro-Wrestler", Ikuhisa Minowa, gave a lecture on November 16th at the Kanezawa Hakkei Campus of Kanto Gakuin University. Like the speech he gave at his old junior high school last month, Minowa's world was explosively revealed to the "Real College Students."

The classroom serving as Minowa's lecture space was completely full with 300 students attending. Minowa was swarmed by a mob of college students when he went to take a peak at the classroom before the lecture began. With the mob's frenzy driving him to a state of "Mini Heaven", a very dignified-looking Minowa appeared in a suit and the excitement level in the classroom went through the roof.

Minowa's theme for the day was " About Real - Ultramodern - New Style - Superhuman." First, about "Real", Minowa explained his own theory, "(When I was a kid) I wanted to be a pro-wrestler and now I'm doing the pro-wrestling that I imagined in my head at that time, so now I am a real pro-wrestler. So all of you that wanted to study at Kanto Gakuin University are now attending the University. You are all real University Students."

When Minowa extended his lecture to "Ultramodern" and "New Style," he explained using the birth of the universe, the big bang, as a theme, "If you think about the time from the big bang until now, the very moment we are living in is, without a doubt, Ultramodern." Although the university students were doing their best to gain a deeper understanding of Minowa's lecture, Minowa's world continued to expand in it's own unique direction.

"If you want to be Superhuman, you have to completely exceed your genetics. I'm still testing it but if I can make my genes 100% complete, I will start a revolution in, and outside of, my brain. Humans only use 50% of their brain, so I want to use Real things as much as possible to stimulate my brain. When I'm able to use 100% of my brain, I will be able make my genes 100% complete. Then I will have to find some way to go beyond that."

Finally, Minowa wrote "Heaven" in big letters on the blackboard, "Heaven is something that humans have imagined, so I don't know if it really exists or not. However, when I win a match or something good happens to me, I'm in Heaven." The students continued scratching their heads as Minowa turned his back to drink water, explaining that "it's embarrassing." Always doing his own thing, Minowa mumbled "this is a new type" as he played with a blackboard that moves up and down.

When the lecture moved to question-and-answers, Minowa gave even deeper insight into Minowa's World. "There are more heavens in Heaven than just Ultra Heaven and Super Heaven. There's Mini Heaven, Splash Heaven and Max Heaven." He continued, "I'd like to have an honest fight with an alien. If it had 6 arms, it would be difficult to strike with them but if it has legs like a human, I could submit it with leg-locks." Speaking about the Open Weight Division, Minowa gave an amazing statement as he closed out the lecture, "Speaking scientifically, there are only two growth stages (in humans) but I want to stimulate my brain and bring on a 3rd growth stage."

Minowa also left the students with a mysterious message regarding the New Year's Eve event, "If I do end up fighting, I want to relay a new, ultimate message."
Click to expand...

Not a KO for the win.

I'd love to see Fedor vs. Minowaman for new years eve event in Japan

I'd love to see Fedor vs. Minowaman for new years eve event in Japan
Click to expand...

Minowa would win, and then spin off into his own dimension

Welcome to the Machine

I'd love to see Fedor vs. Minowaman for new years eve event in Japan
Click to expand...

ZSPTurbo said:
Minowa would win, and then spin off into his own dimension
Click to expand...

i mean, it was neat and all that he won...but come on

then beat soko...and everybody beats soko! mousasi was the only legit fighter in that whole dumb tournament, and he withdrew after the first round...and was replaced by 1st round loser bob sapp

just look at this rubbish:
http://en.wikipedia.org/wiki/Dream_11#Super_Hulk_Grand_Prix_2009_Bracket

BAN
You must log in or register to reply here.