Is Boris Johnson getting forced out?

A bunch of people in his government resigning in protest over scandals. Is Boris Johnson getting ousted? I don't follow UK politics.

Boris Johnson can expect a torrid time today as he faces both Prime Minister's Questions and the parliamentary Liaison Committee, less than 24 hours after Rishi Sunak and Sajid Javid dramatically resigned as members of his cabinet.

On Tuesday evening, Chancellor Mr Sunak and Health Secretary Mr Javid quit the government, leading to a wave of resignations.

The resignations have left the prime minister battling to remain in office in the face of questions about his handling of the row over MP Chris Pincher's conduct.

Mr Pincher quit as deputy chief whip last week after claims that he groped two men at a private members' club, but Mr Johnson had been told about concerns around his behaviour dating back several years.

In Mr Sunak's resignation letter, published on Twitter, said that he could no longer remain loyal to the prime minister, who remains mired in scandal over the appointment of Mr Pincher.

The former chancellor, tipped as a potential future leader of the Conservative Party, told the prime minister he was quitting with "great sadness", saying: "To leave ministerial office is a serious matter at any time. For me to step down as chancellor while the world is suffering the economic consequences of the pandemic, the war in Ukraine and other serious challenges is a decision that I have not taken lightly.

"However, the public rightly expect government to be conducted properly, competently and seriously. I recognise this may be my last ministerial job, but I believe these standards are worth fighting for and that is why I am resigning."

In his resignation letter, Mr Javid - also a former chancellor, having quit Mr Johnson's cabinet once before - said the British people "expect integrity from their government" but voters now believed the current administration was neither competent nor "acting in the national interest".

Standing down as solicitor general, Alex Chalk said in his correspondence to the PM: "To be in government is to accept the duty to argue for difficult or even unpopular policy positions where that serves the broader national interest. But it cannot extend to defending the indefensible."

Moments before the resignation letters began to emerge, the prime minister acknowledged he should have sacked Mr Pincher when he was found to have behaved inappropriately when he was a Foreign Office minister in 2019, but instead went on to appoint him to other government roles.

It had a few hours earlier been confirmed that the prime minister was previously told about an investigation into the disgraced MP's inappropriate behaviour in 2019, despite days of Number 10 saying Mr Johnson was unaware of specific allegations against him.

But the apology from the PM for appointing Mr Pincher was unable to prevent the wave of departures.

He moves from the post of education secretary, a role which has now been awarded to former Universities minister Michelle Donelan.

Steve Barclay has been appointed to the role of health secretary, replacing Mr Javid.

He said it was "an honour" to take up the job.

Mr Barclay was previously the chancellor of the Duchy of Lancaster and chief of staff for Downing Street - a position that now remains vacant.

The PM will likely be pressed further on both his handling of the row regarding Mr Pincher and the subsequent senior cabinet resignations by Labour leader Sir Keir Starmer at midday during PMQs.

Responding to the departures on Tuesday evening, Sir Keir called for a general election, saying: "Only a real change of government can give Britain the fresh start it needs."

Mr Johnson will later in the afternoon face questions from the powerful Liaison Committee in the wake of the latest scandal to come to light during his premiership.

The prime minister is set to be quizzed on a range of topics, including "integrity in politics", the rule of law, and Ukraine and its impacts on the UK, the rising cost of living and the government's response.

But both his appointment of former deputy chief whip Mr Pincher and partygate are both also likely to come up.

The twin resignations of Mr Javid and Mr Sunak mean Mr Johnson's position remains perilous, but cabinet ministers including Dominic Raab, Liz Truss, Michael Gove, Therese Coffey and Ben Wallace did indicate they would be staying in the government and that they still support the prime minister.

However, seven in 10 Britons think Mr Johnson should resign, according to a snap YouGov poll of more than 3,000 people.

The PM has reportedly told allies that he is determined to fight on despite the resignations.

Asked by one aide if he would quit, he replied: "F*** that," according to reports in The Times.

The loss of crunch by-elections in Tiverton and Honiton and Wakefield in June triggered the resignation of party chairman Oliver Dowden last month.

The position of Conservative Party chairman remains unfilled, as does the role of vice-party chairman following the departure of Bim Afolami who resigned on live television on Tuesday evening.

My Johnson's fate could ultimately lie with the Conservative 1922 Committee. Its rules say there cannot be another leadership confidence vote for 12 months after one has taken place. However, rules can be changed.

The PM narrowly survived a confidence vote last month, but suffered a rebellion bigger than that against Theresa May in 2019.

He needed a simple majority - 180 votes or more - to continue in office.

He lied,
Broke the law,
Laughed about it,
Lied again,
Dismissed the Ministerial Code,
Ignored serious misconduct,
And lied again.
The latest scandal is
Chris Pincer was given a high level government position despite their being many allegations of sexual misconduct against him including an ongoing investigation
June 30: Mr Pincher resigns as deputy chief whip after allegedly assaulting two fellow guests the evening before at the Carlton Club – a Tory private members’ club in London’s Piccadilly.

– July 1: Downing Street says Mr Johnson was not aware of any “specific allegations” about Mr Pincher when he appointed him to the whips office – a line that is repeated by ministers over the coming days.

At 5pm the Prime Minister finally bows to pressure and suspends the Tory whip after a formal complaint is made to Parliament’s watchdog that examines allegations of bullying, harassment or sexual misconduct.

– July 4: Downing Street amends its position saying Mr Johnson had been aware of “speculation” about Mr Pincher but that any issues had either been resolved or were not the subject of a formal complaint.

July 5: Lord McDonald submits a formal complaint to the parliamentary standards commissioner saying the No 10 account is still “not accurate” and Mr Johnson was briefed “in person” about the 2019 Foreign Office complaint.
The Prime Minister’s spokesman confirms Mr Johnson was told about the complaint “a number of months” after it had arisen.
Reactions: ludewig

if that vote passes he's done....it's just a matter of if he resigns before the vote to remove him that would be next week

I watched his parliamentary Q&A this morning and it was a disaster....I think the rules change passes today and he resigns soon rather than wait for the vote next week.
Reactions: ludewig

He survived a no confidence vote about a month ago which means he can't have another one for a year according to the rules...so the 1922 committee (which is the conservative member's committee) is voting to change the rules today so they can oust him.

Must be nice to have a political party that holds their leaders accountable
Reactions: Leonard Washington, Grape_Ape, SquirtRussel and 6 others
TS
TS

I wish we had something like Prime Ministers Questions

ludewig said:
I wish we had something like Prime Ministers Questions

Yeah it is really interesting and fun to watch. The snarky comments, etc.
Reactions: kitty

So they aren't changing the rules, but they are having a vote on Monday for new leadership for the committee and a group of ministers is meeting with Boris today to tell him it's over and to resign...including the party whip and the new Chancellor of the Ex Chequer that just took over yesterday after Sunak resigned.

There are two scenarios here – I'm told by government sources.

One – the prime minister accepts his cabinet ministers' call to resign, which would eventually trigger a leadership contest. Or two – he doesn't accept their call, some of them would then most likely resign.

Then it's up to the new 1922 executive committee - when elected - to decide if they should change Tory leadership rules to allow for a second vote of confidence in the PM which, as it stands, it doesn’t look like he has a huge amount of support to win again.
Click to expand...

It's just a matter of time at this point. I think it's up to 39 resignations now since yesterday.
Reactions: ludewig 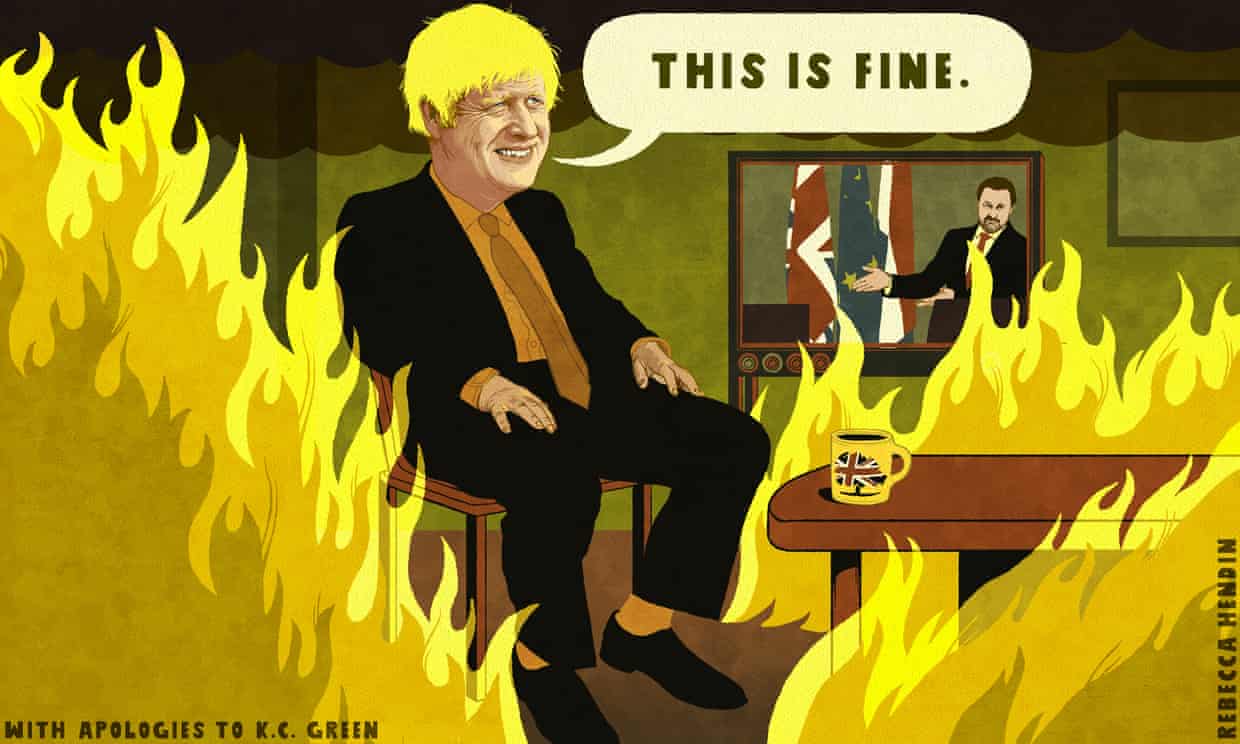 I'm worried admit how this will affect Ukraine

Reactions: SquirtRussel, whatever and kitty

He's almost as awful for the UK as Brexit is

Lol..aghast!! Literally why would he resign if he can just get someone else you take the place of the resigning ministers?

I mean I think he will...but this is another example of people not paying attention.

So looks like next election as late as 2025. Resignation, leadership race, new PM and hold on til then?
TS
TS

He'll stay on as PM until a new one is selected in the fall.

Now the betting starts on the new PM.

This dude has always been a Grade-A piece of shit garbage human.

Good.
You must log in or register to reply here.