The Miami Dolphins have been granted permission from the governor of Florida to allow full capacity at Hard Rock Stadium.

You read that correctly. We're talking 65,000 seats. In the middle of a pandemic.

The green light comes by way of Gov. Ron DeSantis -- whose spokesperson told Andy Slater the team is now allowed to pack their stadium as part of statewide removal of COVID-19 stadium restrictions.

That doesn't mean the Dolphins will rush to allow 65,000 people to watch the team at their next home game ... Slater says the org. still plans on limiting the number of fans to 13,000 at the next home game on Oct. 25. 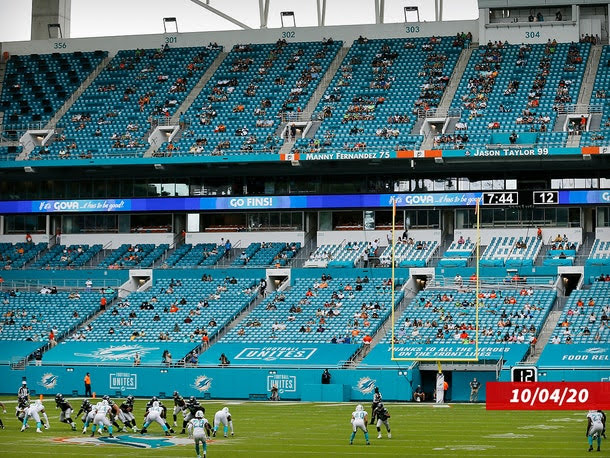 Getty
The news comes on the heels of an announcement from the Green Bay Packers -- which just pressed pause on the possibility of opening up Lambeau Field to fans any time soon.

"Due to the concerning increase of COVID-19 cases and hospitalizations in the Green Bay area and across Wisconsin, the Green Bay Packers today announced that the organization has put an indefinite hold on hosting fans for games at Lambeau Field this season," the team said in a statement.

Plus, with NFL teams like the Tennessee Titans, New England Patriots, K.C. Chiefs and Las Vegas Raiders dealing with possible COVID outbreaks among the players ... it just doesn't seem like the best time for a team to pack a stadium with people!!
TS
TS

who in their right mind would actually go?

Just drop napalm on that stadium.

DeSantis is actively killing thousands of Americans but god forbid we elect a gay black dude who loves to party
Reactions: veggie quesadilla and Simius The Monkey

no pol tag..lets see how many victims this thread claims
Reactions: Beer Goggles, Doctorb and Prince of Zamunda
TS
TS

I want to go to a BUC game before they do something like this. It’s fine right now when everyone is a hundred feet apart and masked but when they stop enforcing those rules it’s gonna turn into a shitshow.
TS
TS

remmy said:
no pol tag..lets see how many victims this thread claims
Click to expand...

Reported , this is a fucking sports thread

Reactions: Prince of Zamunda, Leonard Washington and Simius The Monkey

When all 65k of them spill out of the stadium and back into offices and stores were all gonna catch it anyway. Might as well go enjoy a game.
Reactions: Foolish

FutureMan said:
When all 65k of them spill out of the stadium and back into offices and stores were all gonna catch it anyway. Might as well go enjoy a game.
Click to expand...

This cant be real life

Moonlight Graham said:
how can one grant that kind of permission with a clear conscience
Click to expand...

Tr*mp told him to do it

Since they left it up to the team to decide, what home game do you think they will have a full stadium?

Good. They can open as the team sees fit and can accommodate safely, instead of the government making that decision for them.
Last edited: Oct 10, 2020
Reactions: phat🐄

You can't let Covid dominate your life iirc
You must log in or register to reply here.