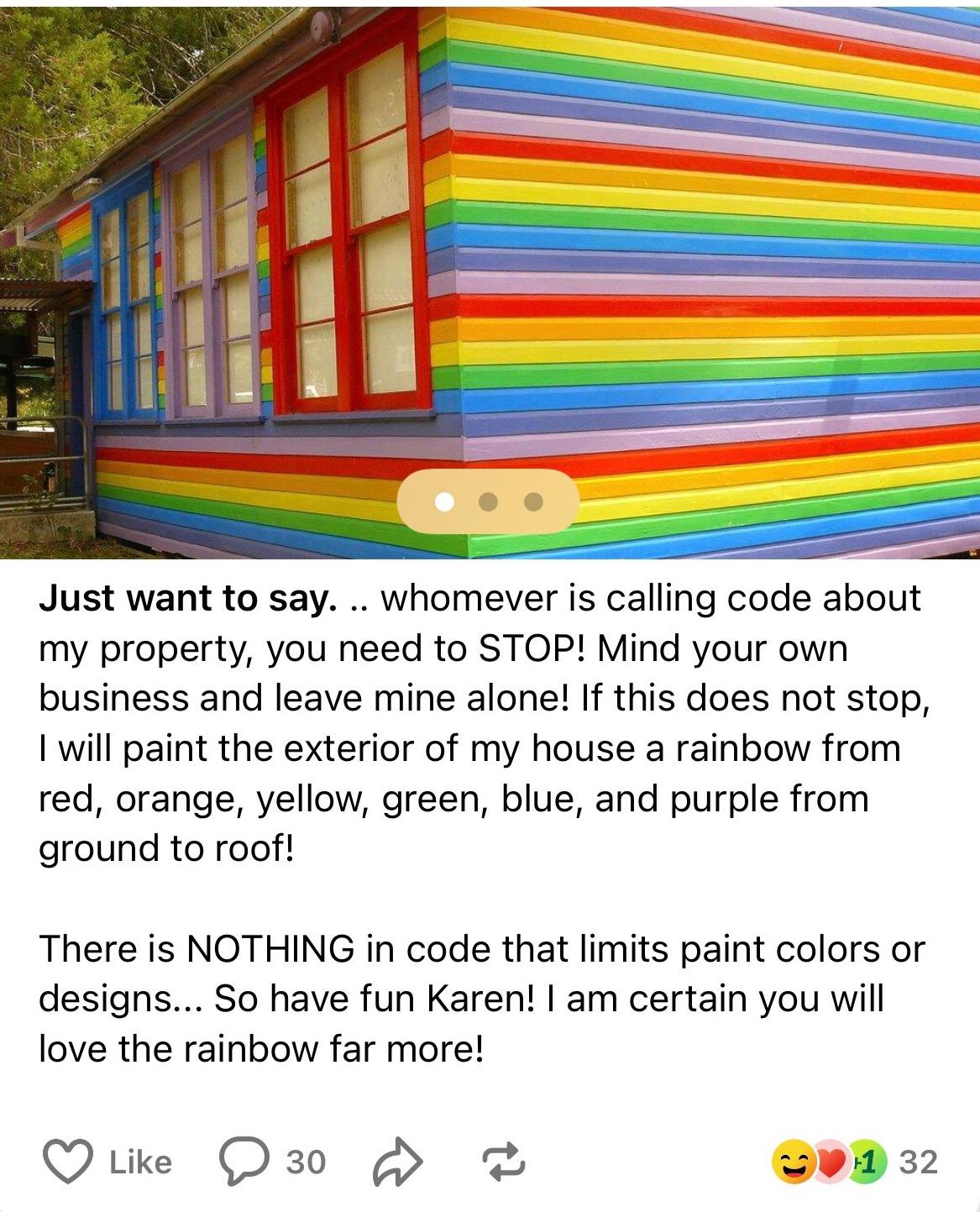 FBI needs to keep an eye on this mans
Reactions: MrBlonde, dorkultra and pookrat
TS
TS

couchlock said:
FBI needs to keep an eye on this mans
Click to expand...

good thing he's from down undahh 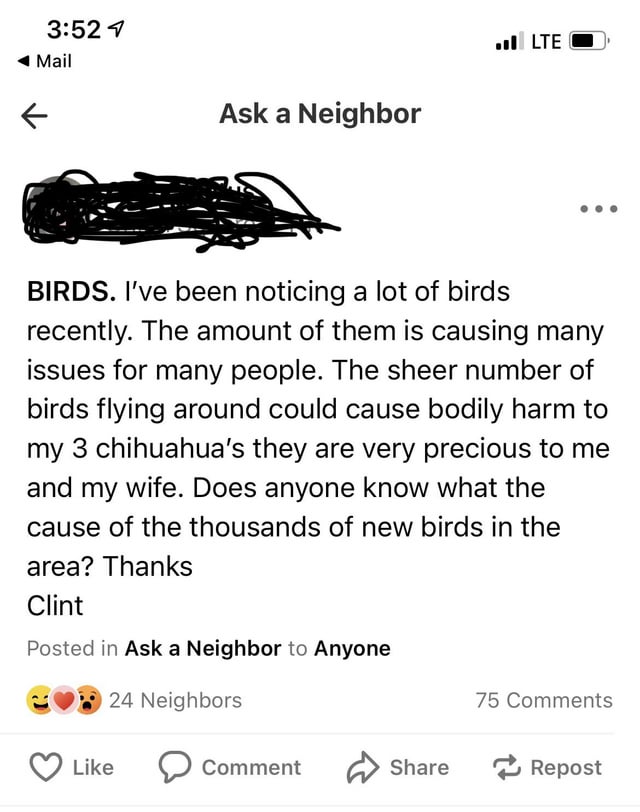 Jinx said:
this was from a thread about taking down birdfeeders, now we here

so starving them is a better choice then knowing that the radiation is making the plants and trees sick these poor birds are depending on humans to feed them to take responsibility for our selfish actions of using these stupid 5G towers all across the world nobody can escape these effects . Can’t you guys just try to shake the program off that they have ingrained in all of you and question something I mean come on that’s just absurd don’t feed birds bought bird seed that goes through a purifying cleaning process. Does anybody know the age old tactic problem reaction solution . This is what our government has been using to slip laws passed us that wouldn’t normally even make it as a bill but they cause the problem forcing us to react and the reaction they are looking for is us asking nay begging them to do something and that’s when they throw out at us their solution and say in light of the situation at hand we are forced to put in effect Marshall law or some form of us losing our rights chopping away at our privacy and our freedom this has been the plan of government takeover for a long long time it’s not a conspiracy theory it’s human mind games they continue to play , no matter who appears to be in power there is a permanent control structure pulling all the strings from a hidden place . If we can just try to take a step back from our turmoil from the world and news then we can actually see the structures of control unfolding We must learn who is benefiting from the events that are transpiring and start questioning everything then we might have a chance then you will know what’s going to happen before it happens and then we could have a chance or at least our children will we need to raise our children to ask questions about as much as they can on things come to their own conclusions not the opinion conclusions of say cnn a news station controlled. Most of those are just a distraction to keep you under their control think like they want you to think believe whatever they want you to believe react the way they want you to react they plant the seeds and push their propaganda and opinions on us as facts then we cuss out anybody that questions what they tell us and fight each other instead of uniting separate and conquer they don’t want us to unite and love thy neighbor or protect our rights are you kidding me that’s not on the agenda see this is why I hate this app cause it’s heartbreaking knowing how many of my fellow neighbors are oblivious to the truth they really are in a matrix a fairytale everything you think you know about this world and even space is all a big lie and cover up everything you think you know you don’t even know the half of it true story if you did you probably wouldn’t be able to register it or accept it and you would probably commit suicide or go on a shooting rage that’s why they have lied and hid everything from us even the Bible has been altered but if you look at the pictures of ancient times you might spot some truth that’s been hidden or unnoticed just saying but anyways I hate this app and am probably going to delete it again think about your logic and their suggestions just because they said not to doesn’t mean it’s in yours or the planets best interest use your own judgment I say cause if you knew anything about nature you would know squirrels know the cure for cancer and nature goes by instinct not what some control freak suggests good luck neighbors brothers and sisters and friends I’ll keep my faith that this might reach even just one person who shakes off the program instilled in them and starts to see the man behind the curtain claiming to be the wizard of oz all movies are information to some degree instead of attacking me your friend the one who is trying to protect you question the one who is making you feel you need to attack me . Listen to your heart not your program god bless I will not stop feeding my birds squirrels or any other hungry wildlife I’m here to protect them and be their voice save them don’t starve them turn off your 5G don’t use the damn problem 4 g is bad too but not as much as the 5 generation pray they don’t target me and get me love each other help each other ask someone nearby if they need help off your assistance don’t just wait for someone who is too proud to ask for help offer it unite look around trust your instincts we all have a guardian angel that’s our own that gives us signs everyday that is trying to communicate with you see it feel it seek the truth if you think you can handle it but it’s mot for the weak hearted if you are sensitive and aren’t afraid to cry then you are very strong and will probably be able to handle the truth and be willing to protect it if you don’t cry and are against showing emotions then you are probably well scientifically or psychologically you are of the weak minded and closed minded but you can change and open your mind if you really want to good luck if you spot me doing something to assist with out asking it’s just me trying to do more good deeds take care
Click to expand...

Here is the cliffs that someone asked for:

So starving is a better choice than letting them die other, insane ways. Everything is a big lie - even the Bible has been altered. Squirrels know the cure for cancer, as crazy as that sounds. I'm hoping that I get through to at least one person. I'll keep feeding the wildlife. Love each other and offer each other your assistance. Trust your instincts. Be strong. I'll be out there doing more good deeds. Take care.

"usable and in good condition. I’d hate to take them to the dump."

This chair has seen some things. 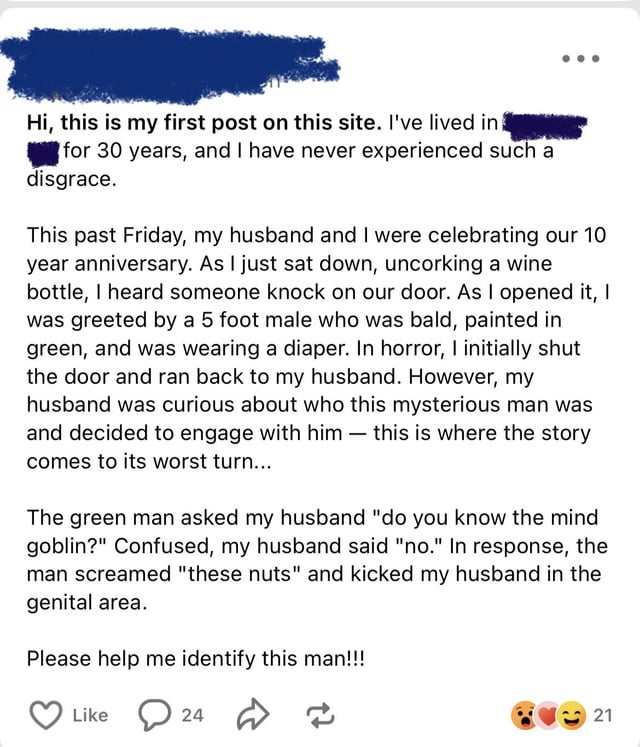 Reactions: MrBlonde, Gob, cbpage and 7 others

Do you know the Mind Goblin?

and then everyone clapped
Reactions: OLBERTMAN

Lame I just checked the past week on my nextdoor and it was all normal. Royal Throne of the Swine

Trying to read that made my head hurt

My house in the mountains is in a community where nobody is on NextDoor. It's nice.

At my parents' though, it's a shitshow. One lady was complaining because she bought some pickles at Ralph's and the pickles were soft. Laugh riot incoming.

Another guy's wife invited her male friend over to spend the week at their house, with his kids. One of them plugged the toilet. He tells the wife who says "No big deal, we know it has issues" and then never tells the husband. Well, one of the demons overflowed the toilet so he goes and tries to snake the toilet causing an even worse mess. The husband then tells the guy he is no longer welcomed at their house and the guy says "Good because I never liked you anyway." Among many people calling the husband a cuck (which seems obvious here), the overarching wisdom was that the solution to this problem was to get a water softener. How about a stool softener?

And the constant complaints about jet noise... the jets are at 10,000 to 14,000 feet on approach to LAX. Nobody can hear shit from that altitude except for the Dash 8s which is only once a day. But the massive military jets going to Pt Mugu? Not a peep complaining about those.

Christ, I gotta start opening the thousands of emails I get from there

Assuming thats in Cali? Its a Sceleporus sp. - fence lizard