GUN one big daddy 1911 and one little itty bitty one 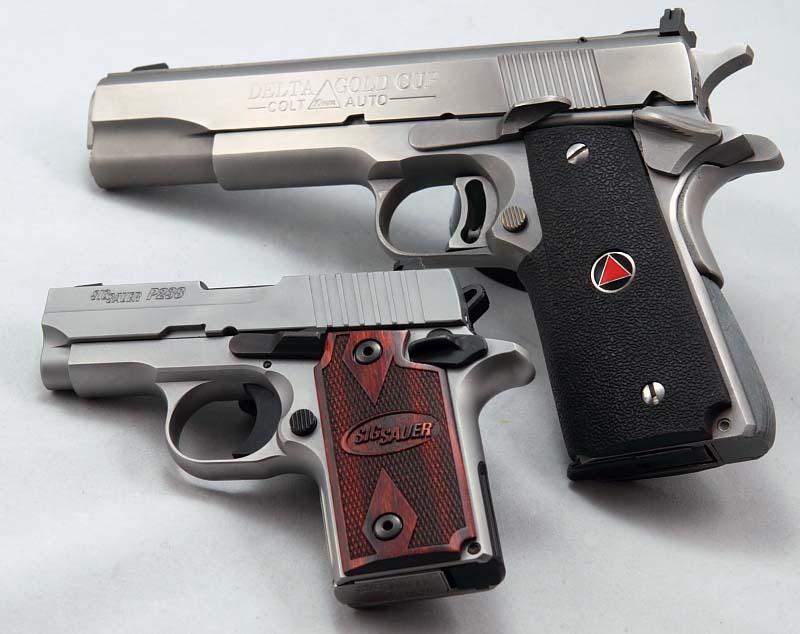 Colt Delta Gold Cup
They only made the Delta Gold Cup for a few years in the late 80s. It's been out of production for a long time, although the Colt Delta Elites are still being made. As you may know, Colt Deltas are 10mm 1911s.

The previous owner was not kind to this one, he literally stuffed it between his mattresses and probably never cleaned it. In addition, there was a pretty nasty idiot scratch. Finally he installed some aftermarket grips.

I did a full detail strip and cleaned every single part. I learned something along the way, Gold Cups have a special sear that is a major pain in the ass to get back together. On the sear itself a tiny spring and lever. In addition, the Series 80 Colts have another lever used to activate the firing pin safety on the slide. So trying to get essentially four components to line up (all while under spring pressure) so that you can re-insert the pin is an exercise in patience.

Anyways, got the gun all cleaned up of carbon, dried oil, lint, etc. Then I got to work on the idiot scratch. fortunately stainless is pretty easy to work with. Following the advice on the 1911 forums, I started with some 420 grit wet/dry sandpaper lubricated with CLP. This got the scratch out but left the area with a different sheen then the rest of the gun. I then used a 3M grey scratch pad to blend the area I worked on to match the finish of the rest of the gun. The Grey 3M is a pretty good match to the Colt finish. I also bought some of the Maroon scratch pad. It's coarser and I think it would match the stainless of a Springfield better.

When the entire gun was done, I finished it up by putting back on the correct vintage grips (found on gunbroker). I'm happy with the way everything turned out.

Sig P238 HD
I also picked up a little Sig P238 HD on a whim. When I was doing the PPT on the Delta, the store just got some of these in. Just for fun I held one in my hand and was surprised at how nice it feels. I usually find small guns awkward to hold, especially if they don't have an extended grip. But on this Sig, even without the extended grip it felt really nice. Still my previous experience with Sig has not been a good one. Picked up a P226 that was poorly made. Regardless I decided to chance it -- I"m a sucker for any gun that is different or unusual.

When I got home I did a little research and what I found worried me. Seems like a lot of the earlier P238s had issues -- everything from a recall, to change in springs, a slide redesign, etc. I was worried that the P238 I bought would be a dud.

I'm happy to report that it does not appear to be the case. I shot 300 rounds today with that little sucker and it worked perfectly. And the ergo is fantastic -- my thumb is in easy reach for the slide stop, safety, and magazine release. Points very naturally and the night sites are great. I was very accurate with it. I shot 200 rounds of WWB and 100 rounds of Federal JHP. 0 issues. So I like it -- I like it a LOT!

I'm living vicariously through your gun collection in case you're wondering.

Mine has shot very well, very accurate, and it is a blast to shoot. The people having problems had the older models but ours are updated (slides, mags, etc) so I doubt you'll have any problems. Probably about 300-400 rounds through mine.