Reminds me of the first flights on Ramadan in Iraq. Doors off, Low and Fast, hold your shit tight, we wont get it back.
Reactions: Paul Revere, spiko and Jinx

jgon842 said:
Reminds me of the first flights on Ramadan in Iraq. Doors off, Low and Fast, hold your shit tight, we wont get it back.
Click to expand...

I know it's been said in this thread, but you can tell a lot about a society by the way they treat their dead.
Reactions: spiko, raytrails, SR_71 and 1 other person

LancerV said:
Kiowa pilots were probably some of the craziest people I ever meet

My experience with Kiowa pilots was in Afghanistan. There was a Major Rambo on this FOB, but I cannot remember if he was Kiowa or Blackhawk.

LancerV said:
Kiowa pilots were probably some of the craziest people I ever meet

are those the tiny ones?

whatever said:
are those the tiny ones?
Click to expand...

whatever said:
are those the tiny ones?
Click to expand...

Yea pretty much Apaches ground eyes, apaches can tie into their big ass camera and pick targets off from it
Reactions: whatever

LancerV said:
Yea pretty much Apaches ground eyes, apaches can tie into their big ass camera and pick targets off from it
Click to expand...

I have a feeling he confused Cayuse with the Kiowa. 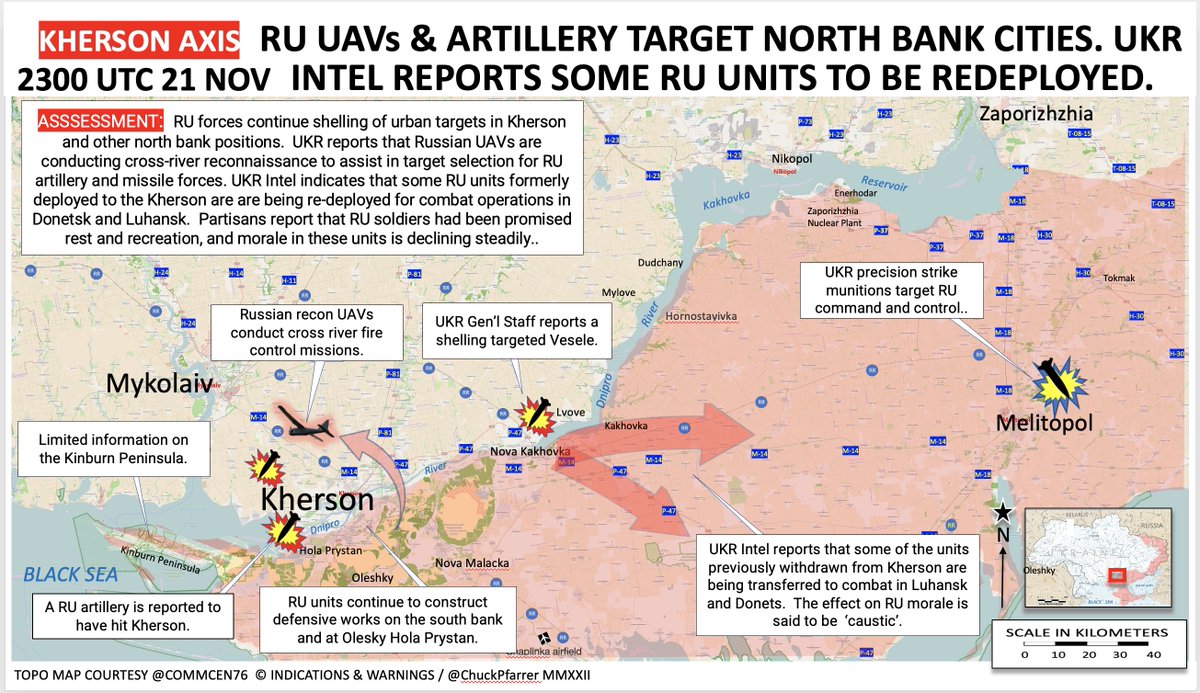 Jinx said:
I know it's been said in this thread, but you can tell a lot about a society by the way they treat their dead.
Click to expand...

During WW2 the dead Nazi and Soviet soldiers were bulldozed in foxholes and/or trenches together by the Soviet bulldozers without the proper burial services cuz they under Stalin's order kept advancing and advancing rapidly without any delays on the Eastern Front.
Reactions: spiko

whatever said:
who makes the bb round. i wonder if this is by design. to have a variety of sizes.

We got tungsten BB lined mortars too, sounds like a bad day.
Reactions: whatever

Two days of shelling caused widespread damage to the Zaporizhzhia Nuclear Power Plant (ZNPP) on November 20 and 21. The International Atomic Energy Agency (IAEA) stated on November 21 that there are no immediate nuclear safety and security concerns and

Two days of shelling caused widespread damage to the Zaporizhzhia Nuclear Power Plant (ZNPP) on November 20 and 21. The International Atomic Energy Agency (IAEA) stated on November 21 that there are no immediate nuclear safety and security concerns and that the integrity of all six nuclear reactors and the spent and fresh fuel storage facilities remain uncompromised despite the intense shelling.[1] Russia and Ukraine both accused the other of conducting the artillery strikes on the ZNPP on November 20 and 21.[2] One Russian milblogger referenced a video of the shelling taken by Chechen forces and stated that it appeared the shelling came from positions in Russian-controlled territory south of the ZNPP, not Ukrainian-controlled territory north of the ZNPP.[3] Russian nuclear operator Rosatom Head Alexey Likhachev warned of a nuclear disaster at the ZNPP, and Russian milbloggers largely amplified his statements and called for the transfer of all Ukrainian nuclear power plants to Russian operation.[4] ISW has previously assessed that Russian forces have staged false flag attacks against the ZNPP and previously reported on Russian forces’ unlawful militarization of the ZNPP.[5] Artillery strikes themselves are unlikely to penetrate the containment units protecting each nuclear reactor and instead pose a greater threat to the spent nuclear fuel storage facilities, which could leak radioactive material and cause a radiological (as opposed to nuclear) disaster if compromised. The continued conflation of radiological and nuclear accidents and the constant discussion of the threat of disaster at the ZNPP is likely part of a wider Russian information operation meant to undermine Western support for Ukraine and frame Russian control of the plant as essential to avoid nuclear catastrophe in order to consolidate further operational and administrative control of Ukrainian nuclear assets and compel elements of the international community to recognize Russian annexation of Ukrainian territory at least obliquely.

The Russian government is continuing to increase its control of the Russian information space as a Russian milblogger noted that Russian efforts to shape the information space “look like a kitten against a rhinoceros” compared with foreign “think tanks,” non-profit organizations, and “independent media.”[6] Russian news outlet Kommersant reported on November 21 that the Russian State Duma may consider a bill before the end of 2022 on the regulation of online “recommender” algorithms that would ultimately allow the government to turn off specific algorithms.[7] The bill is reportedly being developed by Duma Deputy on Information Policy Anton Gorelkin and will include the regulation of social media networks, online cinemas, search engines, and internet marketplaces.[8] Kommersant noted that this bill will require the owners of all sites and platforms to ensure the government’s ability to fully or partially block the participation of specific users and that these provisions appeared before the beginning of the war in October 2021 to specifically target Western outlets such as Facebook, Instagram, and YouTube due to the risk of “social conflict.”[9] Certain Russian milbloggers responded to the speculation regarding the bill and noted that such recommender algorithms make it harder for nations to disperse propaganda due to the prevalence of accessible and personally tailored information available on the internet.[10]The Duma is likely considering this bill in an attempt to address a consistent point of neuralgia in the Kremlin’s ability to present and defend the war to domestic audiences and to establish a direct means of countering both internal and external sources of online dissent.

The Russian Federal State Security Service (FSB) additionally took steps to codify control over the information space and signed a decree on November 4 that approved a list of military and military-technical activities, which if received by foreign sources, can be used against the security of the Russian Federation.[11] The decree essentially codifies types of information relating to Russian military operations that the FSB regards as threats to Russian security that are not technically classified as official state secrets and includes a broad list of provisions relating to informational coverage of the war such as “information on the assessment and forecasts of the development of the military-political, strategic (operational) situation,” and “information about the observance of rule of law and the moral and psychological climate” of Russian troops.[12] This decree represents an extended effort on the part of the FSB to broadly ban a wide range of information on the Russian military, which would ostensibly place tighter controls on discourse among Russian milbloggers and other such sources who frequently discuss and criticize tactical, operational, and strategic dimensions of the war in Ukraine.

Both the proposed Duma bill and the FSB decree indicate that the Russian government is scrambling to take control of the information space as it is increasingly inundated by criticisms of the Russian military that are levied both internally and externally. Russian officials likely seek to consolidate censorship measures to crack down on the prevalence of foreign voices and domestic critiques by applying legislative pressure to fundamental algorithms and presenting a wide range of activities that can be considered detrimental to Russian state security.

Ukrainian intelligence reported that Russian special services are planning false flag attacks on Belarusian critical infrastructure in an attempt that would likely fail to pressure the Belarusian military to enter the war in Ukraine. The Ukrainian Main Military Intelligence Directorate (GUR) reported on November 20 that Russian special services are planning to conduct several false flag terrorist attacks on Belarusian critical infrastructure facilities, particularly on the “Ostrovets” Belarusian nuclear power plant.[13] GUR also reported that Russian special services will blame the attacks on Ukrainian and NATO member states to accelerate the Belarusian military’s involvement in Russia‘s war in Ukraine.[14] ISW has previously assessed that Belarus’ entry into the war remains highly unlikely due to the heavy domestic risk that involvement would pose to the survival of Belarusian President Alexander Lukashenko’s regime and that Russian and Belarusian highlight their bilateral defense cooperation to perpetuate an ongoing information operation that the Belarusian military will enter the war.[15] Potential false flag attacks remain unlikely to change the domestic factors that ISW continues to assess constrain Lukashenko’s willingness to enter the war on Russia’s behalf.

The November 18 video of a Russian soldier opening fire on a group of Ukrainian servicemen while Russian troops were surrendering has served as a catalyst for further division between the Kremlin and prominent voices in the Russian information space. As ISW reported on November 18, a video widely circulated on social media shows a Russian soldier fire on Ukrainian troops as Ukrainian soldiers were taking prisoners in Makiivka, Luhansk Oblast, resulting in the deaths of the Russian prisoners. Open-source analysts and later a New York Times independent investigation confirmed that the Russian serviceman was the first to open fire but did not offer conclusions about how the Russian prisoners died.[19] While Russian officials responded to the video by adamantly accusing Ukraine of war crimes and calling for an investigation into the identities of the Ukrainian soldiers, several Russian milbloggers capitalized on the content of the video to criticize the Russian military and mobilization practices. One milblogger noted that the Makiivka shooting video is a clear example of how mobilized recruits lack the basic morale and discipline to properly fight for their beliefs and claimed that it is ridiculous that so many Russian soldiers even surrendered to Ukrainian troops in the first place.[20] The divide between milbloggers criticizing the Makiivka shooting is emblematic of Russian military failures, and the Kremlin’s using it to further an information operation against the Ukrainian military may further fragment the information space.
Reactions: Paul Revere, Achmiel, spiko and 2 others

wonder if theres any truth to this

Reactions: Twinsen, spiko and whatever

except to be an unemployed prostitute is pretty bad.. I mean how bad do you have to be at sex to have no customers....
You must log in or register to reply here.