Finally bit the bullet and went for the Benchmade Nitrous Stryker W/ Black D2 Steel Tanto blade. Also uprgraded to the Surefire E2D LED from my old Xenon E2D (sold to a friend) which can either go with 5/120 lumens, running at 72/2 hours respectively. So its a much better suited EDC light, since I didnt always need the blinding light. Also, my upper receiver came too. A lot of goodies arrived today:

So my EDC layout:

...I feel like a pack mule getting ready to go in the mornings

But shit, my family used to rip on me for carrying a flashlight and knife everywhere, until they started asking me to use them all the time. I just give them a smug look a I hand it over, not saying a word. All razzing has since then stopped.

Looks like a nice knife, I might invest in a benchmade or a gerber soon, how much was the knife?

Sweet knife - My 9050 has been solid for the last few years.

I got mine for $108.60 from the seller BigTCalenders_BigTSports (I price "matched" another seller and got it brought down from $118.10.) 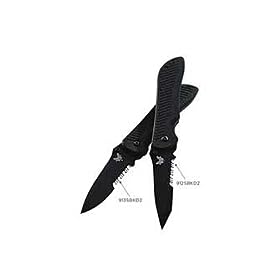 Well, actually I'm a video producer/director. So I am either showing current projects to clients or working on them while I'm traveling. But lol, no not every day.

I shouldn't be on OT right now.

I have had my Stryker for less than 24 hours now, and I already trust it a lot more than my Kershaw that i was carrying around. Not that Kershaws are bad knives, I can just feel the difference in strength in the shank and locking mechanisms. Plus I felt that I had to baby the blade/tip of the Kershaw. The Benchmade feels bullet proof.
TS
TS

Also, I don't own a BMW. That would be my fathers car, which I am loving every minute of driving, until I get my 4Runner back from the shop. I still like my truck more tho. I know, blasphemous.
You must log in or register to reply here.