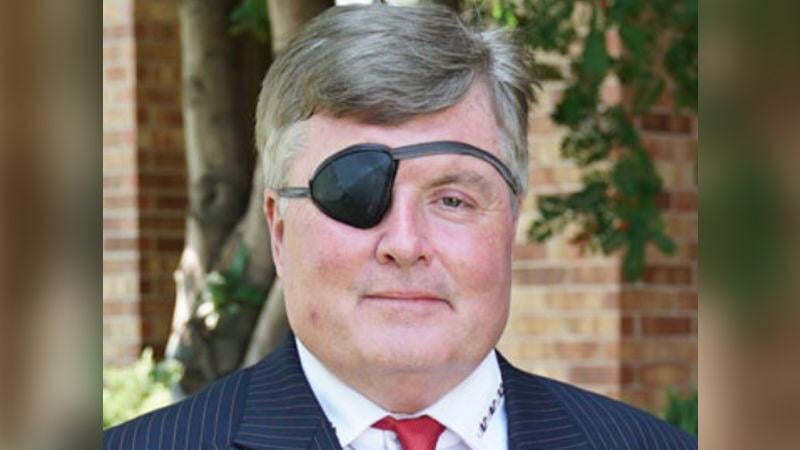 Charles "Ed" Brown, 61, who was featured on TV ads and billboards with his distinctive eye patch, died by suicide Monday, police said.

Who threw him off?

ST. LOUIS — A well-known lawyer jumped to his death Monday from an 11th-floor balcony at One Memorial Drive in downtown St. Louis.
The victim was identified as 61-year-old Charles "Ed" Brown, who wore an eye patch and was regularly seen on television ads and billboards in the region.


Police Sgt. Keith Barrett said he jumped about 4:30 p.m. Monday and landed on a roof that is accessible from the third floor.
One Memorial Drive is the Gateway Tower, which is adjacent to Interstate 44 and Gateway Arch National Park. The law firm's St. Louis office is on the 11th floor of the building.
"We are shocked and devastated," said David Shulman, a representative for the firm Brown & Brown. "We request the privacy of the family is respected during this most difficult time."


St. Louis police officer Michelle Woodling said homicide detectives went to the scene, however, "since there were no suspicious circumstances noted at this time, the investigation is being handled by district detectives." It is being investigated as a suicide.

Brown and his brother Dan formed the firm in 1993 and specialized in personal injury and criminal defense law. The brothers also starred in a video series called "On the Road with Brown & Brown," an often folksy tour of St. Louis metro destinations.

According to the company's website, Ed Brown grew up in Spanish Lake and graduated from the University of Missouri at Columbia with an accounting degree. He earned his law degree from St. Louis University.

He started his law career working for Citicorp and as a law clerk with the Illinois 5th District Appellate Court. He then returned to St. Louis and joined his brother to launch the firm, where he was a principal partner. Since forming Brown & Brown, Ed Brown handled thousands of traffic tickets and criminal cases, according to the company website.
Shulman said Ed Brown loved his family and enjoyed tennis, riding his motorcycle, sports cars and traveling the world.
Reactions: Aznpho and Nom

Lucy pulled the football away one last time
Reactions: Wolf

melroy said:
White men over the age of 65 have the highest rate of suicide
Click to expand...

I get it. In a lot of cases it’s probably preferable to sitting home alone waiting to die.

who the fuck cares

Maybe he thought the ledge was farther away
Reactions: sp00n155
TS
TS

I think I've seen his billboard here in STL. Look at that stupid eye patch. Look at it.

hurleywurley said:
Maybe he thought the ledge was farther away
Click to expand...

Why would you question his depth perception?
Reactions: MassiveGas, Twinsen, smithers and 1 other person

hurleywurley said:
Maybe he thought the ledge was farther away
Click to expand...

FutureMan said:
I get it. In a lot of cases it’s probably preferable to sitting home alone waiting to die.
Click to expand...

i read that as death perception jokes

Kevin said:
i read that as death perception jokes
Click to expand...

he can't be that well known, i've never heard of him

T_Dawgg said:
you gonna catch these hands if you keep talkin to me like that
Click to expand...

Trungtastic said:
he can't be that well known, i've never heard of him
Click to expand...

You not from the lou either.

Really? Your 291st post over the past 16 years and THAT'S what you chose to go with?